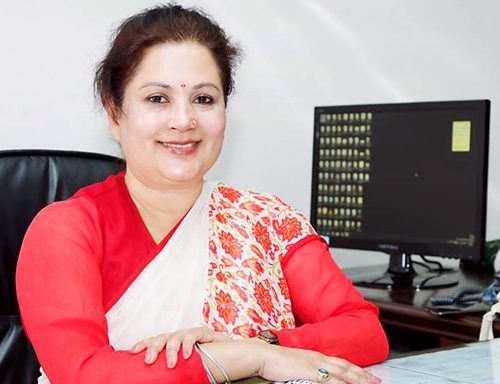 She has over thirty-two years of experience in law, media, public relations and development sector.

She is the founder Vice-President of International Law Association Nepal branch. ILA Nepal was established in 2011, which has organized many national seminars including an international conference in ESC rights. ILA Nepal also conducts the Philip C. Jessup International Law Moot Court Competition in Nepal where she often serves as a judge.

Ila completed her education from India, Nepal and UK. Her first undergraduate degree is a B.Sc., in bio-science and a second undergrad, LL.B. in common law from India. She also graduated in Sanskrit literature and earned a diploma in journalism from the Nepal Press Institute.

After her LL.M. in Public International law and Human rights (Dissertation:- Sharing International Watercourses: a Case study of Mahakali River) from Tribhuvan University, Nepal, she practised as a consulting lawyer in a corporate law office specialising in infrastructure joint-ventures in Nepal. She continued her public relations consultancies and editorial writing for her newspaper five days a week on political, development and gender issues.

She completed her next LL.M. in International Business law studying International trade and development (Dissertation:-Elements of an appropriate domestic Competition law for Least Developed Countries: the Nepalese Experience) on a British Chevening scholarship at University of Hull, UK. On returning to Nepal, she worked as a national consultant for Ministry of Industry & Commerce & UNDP project on trade law issues, advocacy and drafting of domestic WTO-compliant legislation in post-WTO Nepal.

Later, as Team Leader for Economic rights and Livelihood at ActionAid Nepal, she was involved in the advocacy for land rights, water rights, farmers rights, community forests, globalization issues, economic, social cultural rights as in ICESCR and its Optional Protocol and especially how it will impact the right to food. She has been involved with policy advocacy, networking and lobbying at national and international levels including at the United Nations treaty-making. She was involved in public interest litigations, mainly in consumer law and cartelling.

She was instrumental in designing and teaching a three-credit academic Master’s Course provided by the Election Commission Nepal in collaboration with the School of Law, Kathmandu University and the Norwegian Centre for Human Rights at the University of Oslo. The Course in Electoral Laws & Management covered a broad spectrum of issues related to representative democracies. It began with the fundamentals of transferring the ‘will of the people’ to decisions in representatives bodies and then covered systems of representation, electoral standards, minority and group representation, post-conflict issues, independence & autonomy of the election management bodies, election observation, electoral reforms and operational issues.

She believes that the Supreme Court, the Media and the civil society are the only allies for Election Management bodies. Political parties and politicians are important stakeholders but have a complex relationship with the Commission. Therefore, she always emphasized civic engagement. Considering her background in media, public relations and development, she has tried her best to give the Commission a new vision. She had been working on having an umbrella civic engagement strategy that will cover outreach programs on voters education, media engagement, civil society engagement and public events like the National voters day. She started a knowledge initiative to document, consolidate and build on the knowledge and innovations that emerge during elections as well as the wisdom of policy decisions taken during non-election times. She has tirelessly worked towards building a regional institute owned by all eight EMBs of Forum of Election Management Bodies of South Asia (FEMBoSA) called the South Asian Institute of Democracy and Electoral Studies(SAIDES).

All the above major initiatives are part of the Second Five year Strategic plan that was drafted by a High-level Drafting Committee chaired by her. The five-year strategic plan is a guide for the Election Commission that stresses excellence, integrity and inclusion and identifies five pillars of action and benchmarks.